Pair Go - Team Variant of the Game of Go 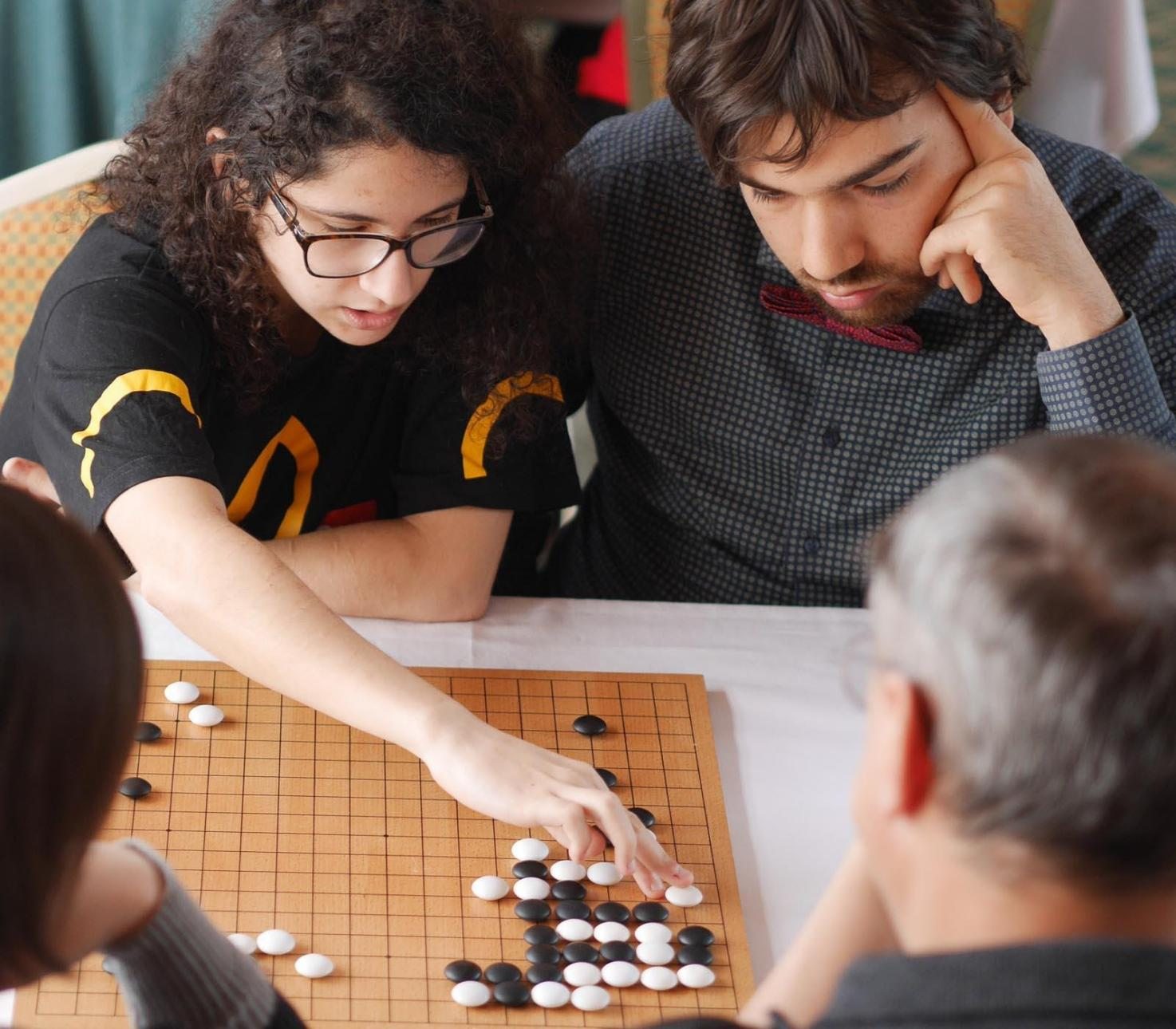 Pair Go is a team-variant of the ancient strategy board game called Go, also known as igo in Japan, weiqi in China and baduk in Korea.

How to Play Pair Go?

In Pair Go, two pairs of two players face each other, making for a total of four players per game. A pair is made up of one female and one male player, who form a team and officially get the rank that is the average of their combined individual ranks. The players take turns placing stones on the board.
Pair Go specifies one male and one female player per team. There is also a more general version of team-Go that allows the players to be of any gender: this is called "Rengo".

The Rules of Pair Go

The rules and etiquette of Pair Go and Rengo are the same: the two players in a pair take turns placing their moves, with the female player starting (when applicable), and the female player of the opposing team responding first. Then it is up to the male player with the black stones, whose move is followed by a move of the male player with the white stones. This order of play is maintained until the end of the match and it is forbidden to play out of turn.
Since this can at times be confusing and it is easy to lose track of the order, the players are allowed to ask their partner: “Is it my turn?”. If a player accidentally plays a move when it is not their turn, they must give three capture-stones to their opponent as a penalty. If a player is caught playing out of turn intentionally, their team loses the game immediately.

Discussion among players in team-Go is taboo. During the game it is prohibited to talk to your teammate or to communicate anything that could influence the content of the game. You are only allowed to ask if it is your turn and if your partner agrees to resigning. Your partner may answer with yes or no.

Apart from these specific rules for Pair Go, the rules for normal Go apply.

Teamwork – Give and Take

When you play Go by yourself against a single opponent, you can strategize on your own, do exactly as you wish and only have yourself to blame if things go south. With Pair Go and Rengo things are a bit different. The difficulty of playing two versus two lies in teamwork and self-reflection.
Perhaps you already know your teammate, perhaps you don’t, and this can certainly make a difference, but the main challenges you will face are the same either way: controlling your emotions and learning to go with the flow. Just like in a general work environment, you might have better communication with some of your colleagues than you do with others, but if you want to get along, the key is to find common ground.
Playing Go in a team is all about letting go; you can only control 50% of your team’s moves, so why would you get angry at your teammate if they make a mistake? Looking at the game from your teammate’s perspective is half the fun and will allow you to grow. It is also important to remember that the opponents have the same limitations as you do. Although non-verbal communication for the purpose of influencing play is prohibited, it is often possible to read the mood during play. When you get flustered or upset, chances are that your teammate will notice and be influenced by it: perhaps he/she will try to make up for a mistake and make things worse by doing so, or they will feel pressured, ashamed or stressed, which never helps anyone.

Personal and Mutual Growth – Making Each Other Stronger

The more you strive for mutual growth in team-Go, the more you will see your personal growth improve. The beauty of letting go is not just the management of expectations. That is only the first step. What comes after, when you no longer get swayed by emotional triggers, is a sense of balance. You will be able to look at your teammate’s actions from an emotional distance; this will allow rational logic to do its job, without being overridden by silly worries. By taking a step back, you will no longer judge your teammate’s moves through your biases, but will look at them matter-of-factly. The moves your teammate plays are simply a fact. Try to understand them and build your game around them. You might be surprised by the wave of new ideas that will enter your thoughts.
You might even learn something from your partner and realize that your own thought patterns are not always as rock solid as you thought.

Often a team consists of one less experienced player, which is usually the player that feels more self-conscious about their moves, and a more experienced player. Leadership is important in a team, but this does not mean that the stronger player should always take control and show the weaker player how to follow. Strength lies in mutual understanding and adaptation. Be mindful of each other and respect each other’s boundaries.

Strategizing Together and Spotting Weaknesses

Whether you know each other well or not, strategizing together is probably the most fun part of teamwork and it is also the most rewarding. It is powerful to talk about each other’s priorities and preferences. By doing so, you will find out where you can complement each other and in what areas it is important to make tradeoffs. In Go, this may directly translate into the type of opening and the style of game you want to play together – be it territory-oriented, an influence-style of play, a calm and forgiving way of dividing the board, or a complex fighting strategy from the start. By making arrangements with your teammate, you will build trust and team spirit: “I am not good at life and death situations. If we are being attacked, please try to make a living shape as quickly as possible.” Or: “If our opponents play a defensive style, let’s try to make things complicated!”.
There are two sides to the coin: there is your team, but there is also the opponents’ team. Try to learn what you can about your opponents before the game starts and strategize on how you can surprise them or target their weaknesses. Apart from that: just have fun! 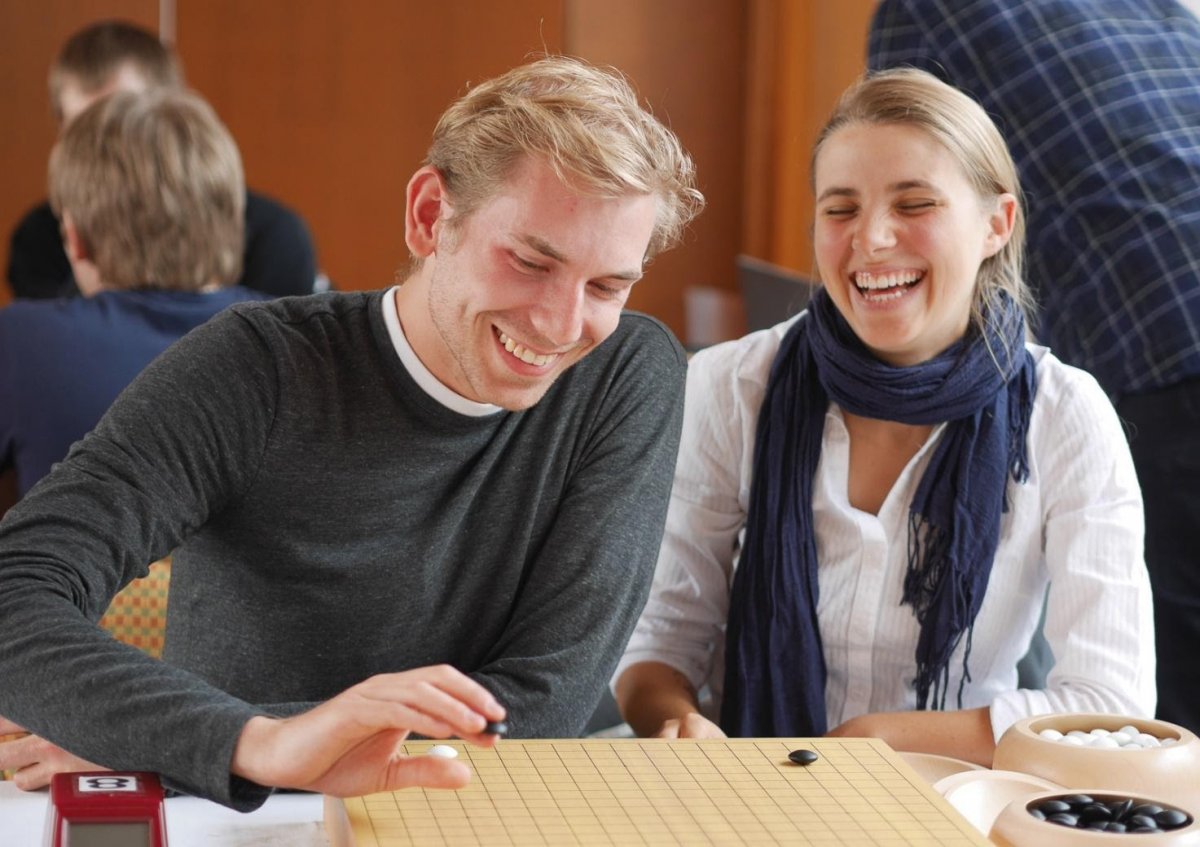 Pair Go without emotional expectations can be a lot of fun. Photo by Antonín Pavelka.