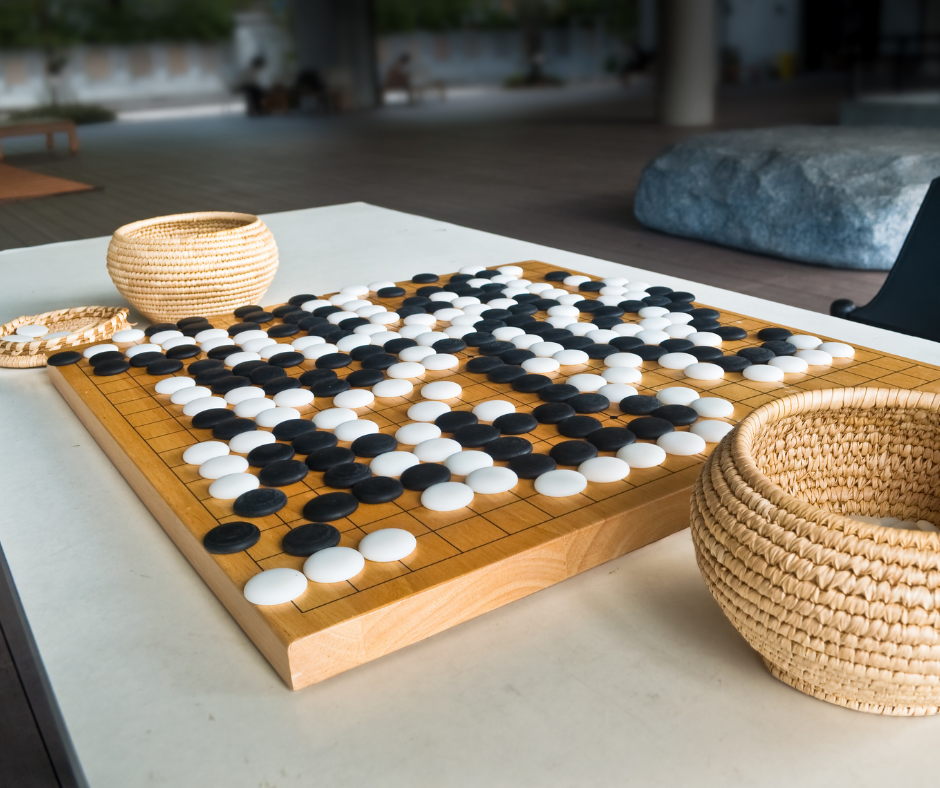 But what are these different sets of rules? Is Go with Chinese rules a different game than Go with Japanese rules? NO, it's still the same game. However, there are a few interesting differences about counting score and about some special positions on the board. Before we examine these differences, let's quickly repeat the rules of Go.

Go rules | What is worth knowing?

The rules of Go are simple. The players put stones on the board, one after another. Each player tries to take control over a bigger part of the Go board. If a player manages to take all the liberties of an opponent's stone, they take the stone off of the board. The stone becomes a prisoner. There also exists a ko rule which forbids repeating a situation on the board. The last thing is komi: a bonus which the player with white stones gets because of the initial advantage of black. Read a detailed description of the Go rules here.

An important consequence of the Go rules is that some stones at the end of the game should be considered dead and other should be considered alive. As you can read in the article about eyes in Go game, if a group of stones has two eyes, it is alive. If at the end of the game a group doesn't have formed eyes but it is clear that they can be easily created if only the opponent attacks the group, then it is also considered alive. If the eyes cannot be created, the group is dead (an exceptional situation of living without two eyes is called seki).

The rules of Go presented above sound simple and clear. However, in fact each of the mentioned points can be understood in a few slightly different ways. What does it mean "to control a bigger part of the board"? How should counting a score look like? What is the exact formulation of the ko rule? What should be the value of komi?

To determine the final score with the Japanese rules, players first check which stones should be considered dead and take them off of the board. Then every intersection surrounded by a player is counted as one point. Also each of the prisoners and stones which were dead at the end of game is counted as one point. In practice, to make things easier, the prisoners and dead stones are just put into the opponent's territory and then the players count the remaining intersections. The player who has more points, wins the game. This is called a territory scoring.

In Chinese rules a different approach called area scoring is used. What is called a player's area is not only the surrounded intersections but also the living stones of the player. To determine who won the game, the players check whose area is bigger than half of the board. For example, they decide to check White's area. They can freely take off of the board the living White stones and the dead stones of Black, so that it's easy to count how many empty intersections are there. Afterwards they count the number of living White stones which remained on the board. The two numbers are added and if they exceeded half of the number of all intersections, it means that White won the game.

At first glance, it's not obvious that these two scoring methods should yield the same result. In fact they do. Players put stones one after another, so at the end of the game the number of stones put on the board by both players is the same. The number of dead stones (at the end of the game) and captured stones (during the game) is a difference between the number of played stones and the number of living stones. If we take these things into account, we will realize that having an area bigger than a half of the board (by Chinese rules) is equivalent to having more territory than the opponent (by Japanese rules)... alright, ALMOST equivalent. 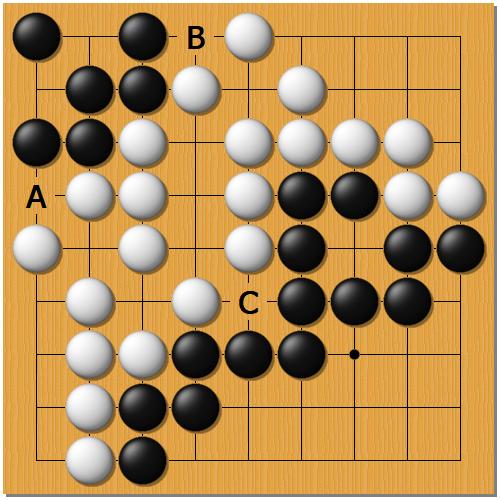 Note that Black will take two of these intersections and White only one. As a consequence Black will put one more stone on the board than White. Therefore, the final result counted with an area scoring will be one point better for Black than if counted with a territory scoring. 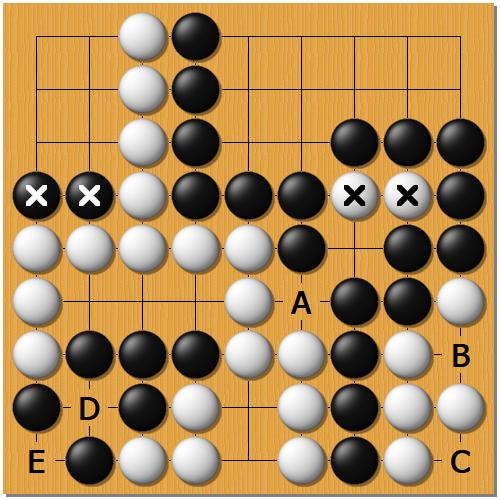 A thing which often confuses beginners is determining which stones are dead at the end of the game. On the above diagram two marked stones of Black and of White are trapped within opponent's territories and have no chance of making life. And how about groups in the bottom corners? After reading the article about eyes and false eyes, you will realize that B and D are false eyes which means both of the groups are dead. If Black wants, Black can play at B and later also at C. If White takes the outside liberties of Black's corner group, then later White will also be able to play at D and E.

Should the players make these moves before passing? If Japanese rules are used, then for sure NO! Playing such moves would result in losing points. On the other hand, in Chinese rules putting a stone inside one's area doesn't change the score. In this respect Chinese rules might be a bit easier for beginners. They can just capture all the dead stones. It's not obligatory but it's not a loss either. However, one needs to be careful! One shouldn't put stones within one's area before playing all the neutral points. In Chinese rules, playing at a neutral point like A is a gain. Black should certainly play it before thinking of playing at B.

Go Rules | The value of komi

In the four-thousand years long history of Go komi is a relatively new idea. It was invented in the beginning of the 20th century when players started treating Go more as a sport than before. At those times the first big Go tournaments were organized. Thanks to the compensation given to White the games became fair. The results of games stopped being dependant of who was playing with which colour. Read more about the History of Go.

Determining the correct value of komi was not an easy task. After a few decades of experiments komi in Japanese rules was fixed at the value of 6,5 points. In Chinese rules komi of 7,5 points is used. Read more about the history of komi.

Go Rules | Repeating a position on the board

In the previous article explaining the rules of Go there was mentioned a position called ko. In such a position it would be theoretically possible that the players take a stone of each other one after another and the game would never finish. All the sets of Go rules forbid such a play by stating that taking back the ko, right after the opponent took it, is not allowed. Are there any other positions in which a situation on the board could repeat? 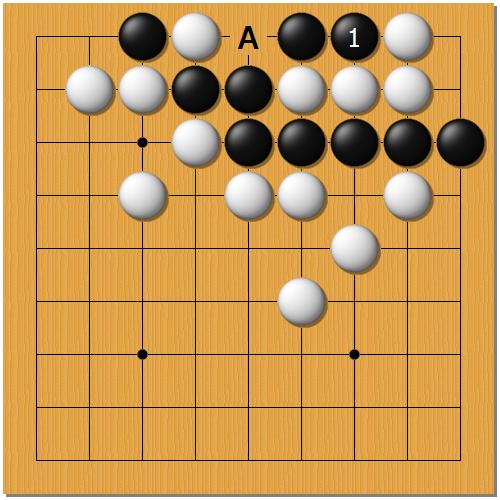 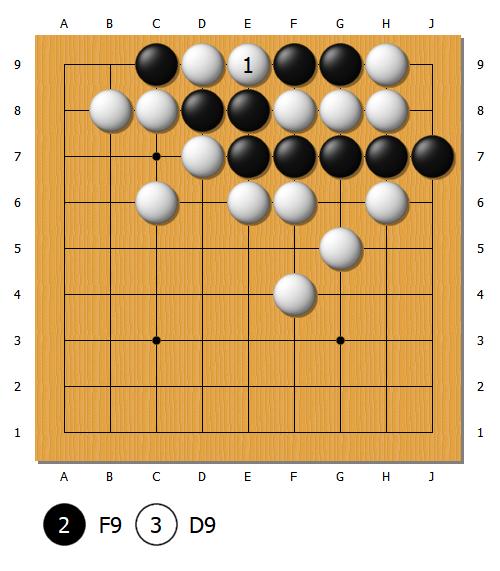 Except for ko there exist also another positions which can lead to repeating a situation on the board. The one shown on the above diagrams is called an eternal life. Black's move at 1 is self-atari. White can capture Black by playing at A. Then Black captures back and White repeats the position. It's not easy to explain why these moves are reasonable. It's all about Black trying to make two eyes and White trying to falsify them. One can find a detailed explanation of this position on Sensei's Library. To get a deeper insight into the question of life & death of groups, take part in Polgote Life & Death Go Problems Training.

In Chinese rules the same rule is applied to this situation as to ko. A move which repeats a situation on the board is not allowed. However, in Japanese rules the ko rule is referred only to the position of a normal ko. In other cases of board positions’ repetition the game is declared as having no result. Then, the players need to clear the board and they play another game. However, the players don’t add the time on the clock, they need to play with the time which remained for each player from the first game. 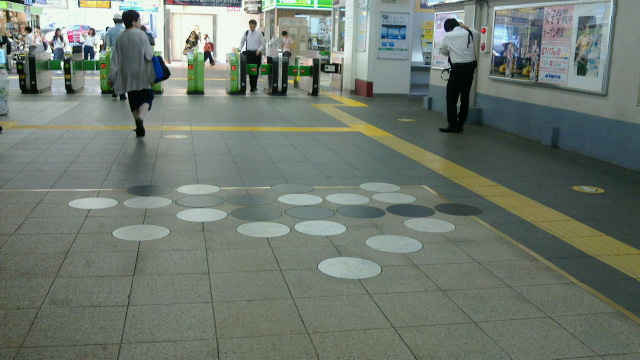 Such situations are extremely rare. In Japan the eternal life is considered as such an exceptional and amazing board position that it was painted on a floor of one of the subway stations in Tokyo.