Board Game Go – How to Play? 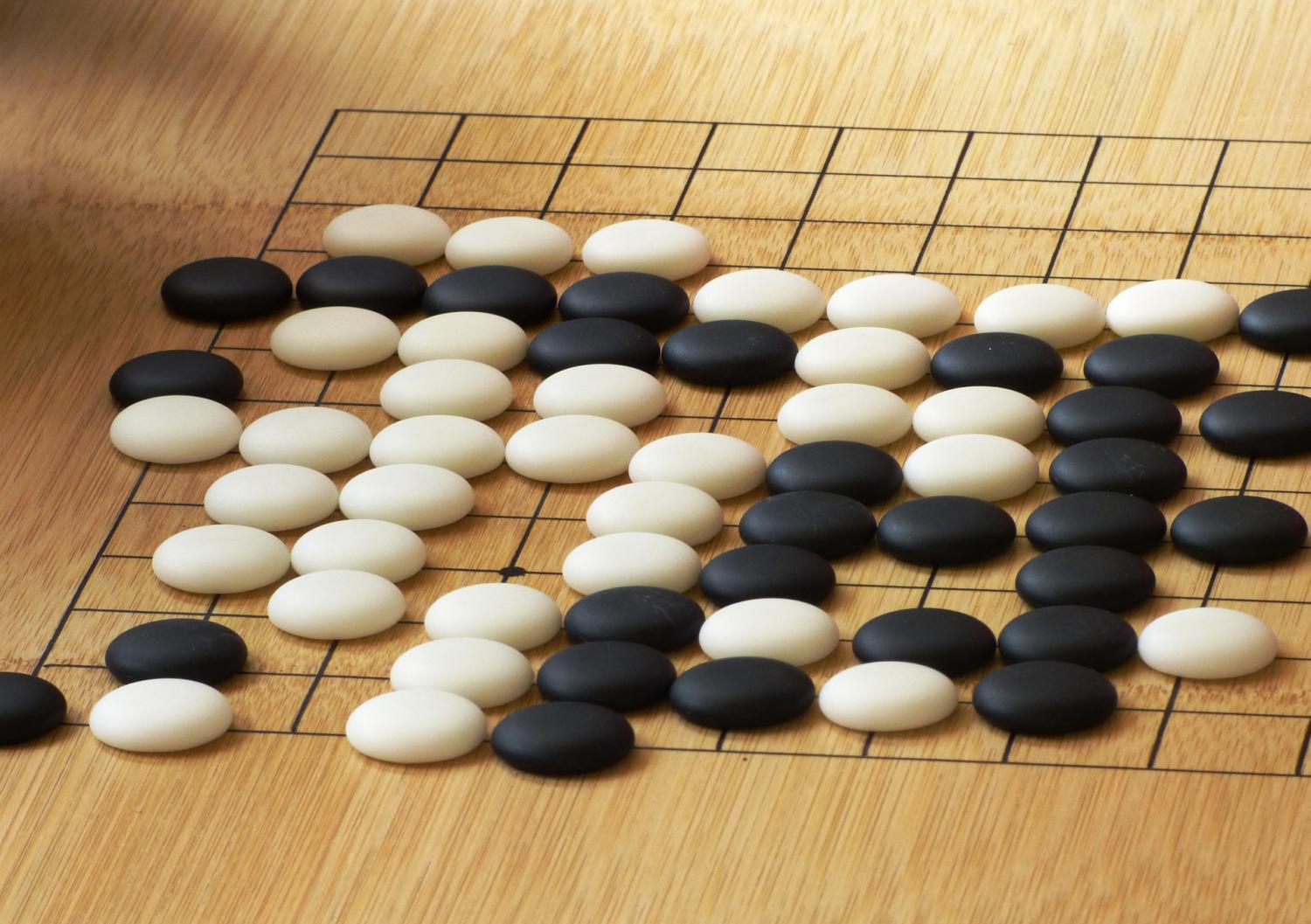 The game of Go is played between two players on a square board. One of the players plays with black stones and the other one with white stones. The goal of the Go game is to surround a bigger part of the board than the opponent. Find out more about board game Go. Find out how to play Go and improve your game.

In the beginning of the game the Go board is empty. Then the players put their stones on the board one after the other. The player with black stones makes the first move. An example of the first moves of a game is shown on the diagram. 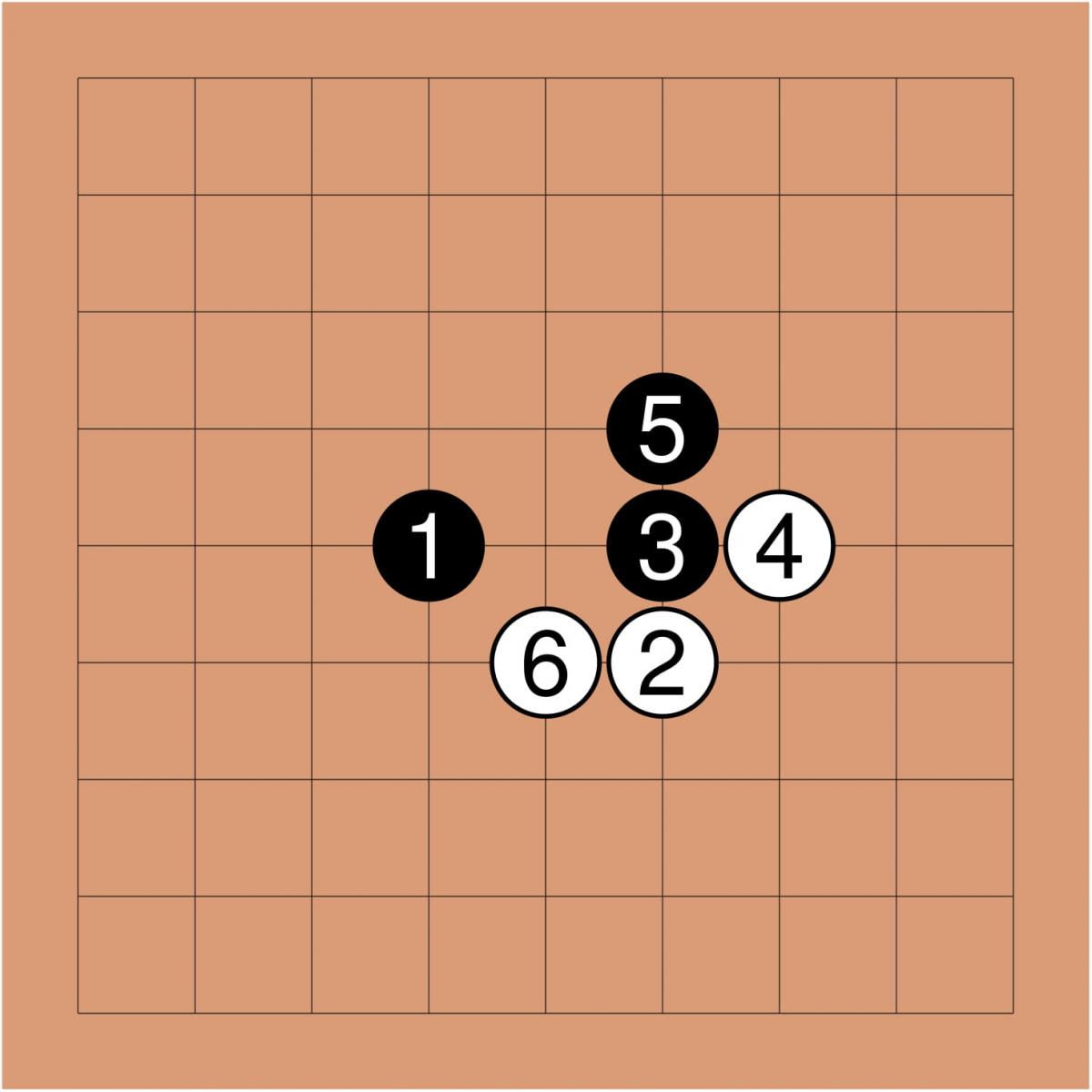 The game finishes when the players split the board and decide that no more sensible moves are available.

What is needed to play Go?

To play a game of Go one needs a Go board and a set of Go stones. The Go board might be of various sizes. The most important and prestigious Go tournaments are always played on a big board of size 19x19. Beginners usually use a small board of size 9x9. With such a board a game won't take too much time. However, it doesn't make the game less interesting. During big Go events, like European Go Congress, there is always a 9x9 tournament.

Go was invented in China. In Chinese the name of the game is 围棋 (weiqi) and it means "the surrounding game". In Go, a move consists of putting a stone on any empty intersection of the board. The goal of the players is to surround as big territories with their stones as possible and not to let the opponent do so. It explains why the game is called weiqi. An example of the game is shown on the diagram. 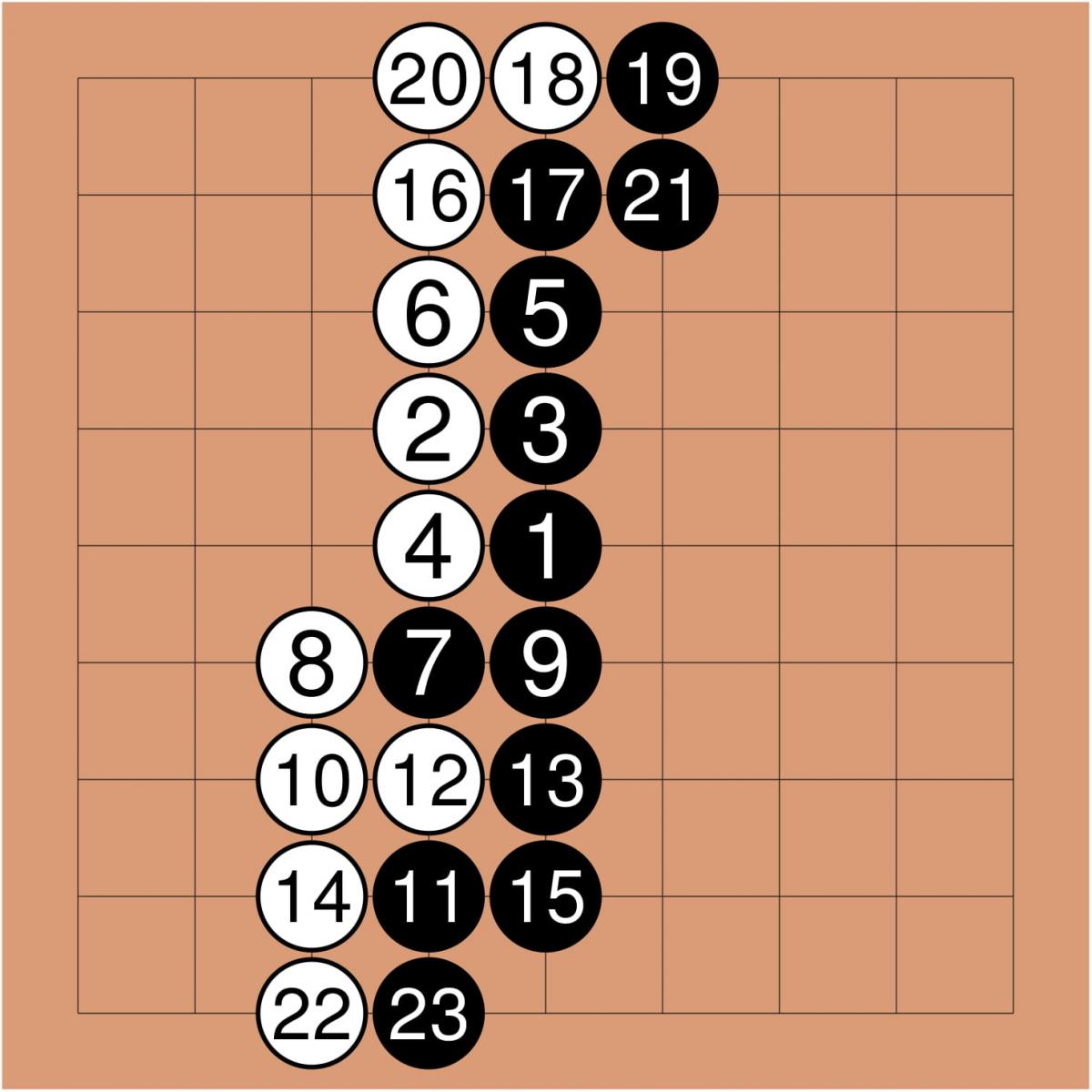 Black surrounded a territory on the right, and white on the left. The one who surrounded more empty intersections (got more points) is a winner. On the diagram black got 35 points and white got 23 points, so black wins.

However, one could ask a question: what if white doesn't agree that the area on the right is black's territory? Can't white play a move in that area? That's true, white can put a stone there. However, it's not clear if the stone will survive. To understand it, we need to learn one more rule of Go. It's a rule of capturing stones.

Capturing stones in the game of Go

An important rule of Go says that when a stone gets closely surrounded by the opponent, it becomes a prisoner and it's taken off of the board. It means that to capture an opponent's stone, one needs to put one's stones on all empty intersections neighbouring that stone (so-called liberties). The same applies to chains of stones. On the diagram there are shown a few chains of black stones. 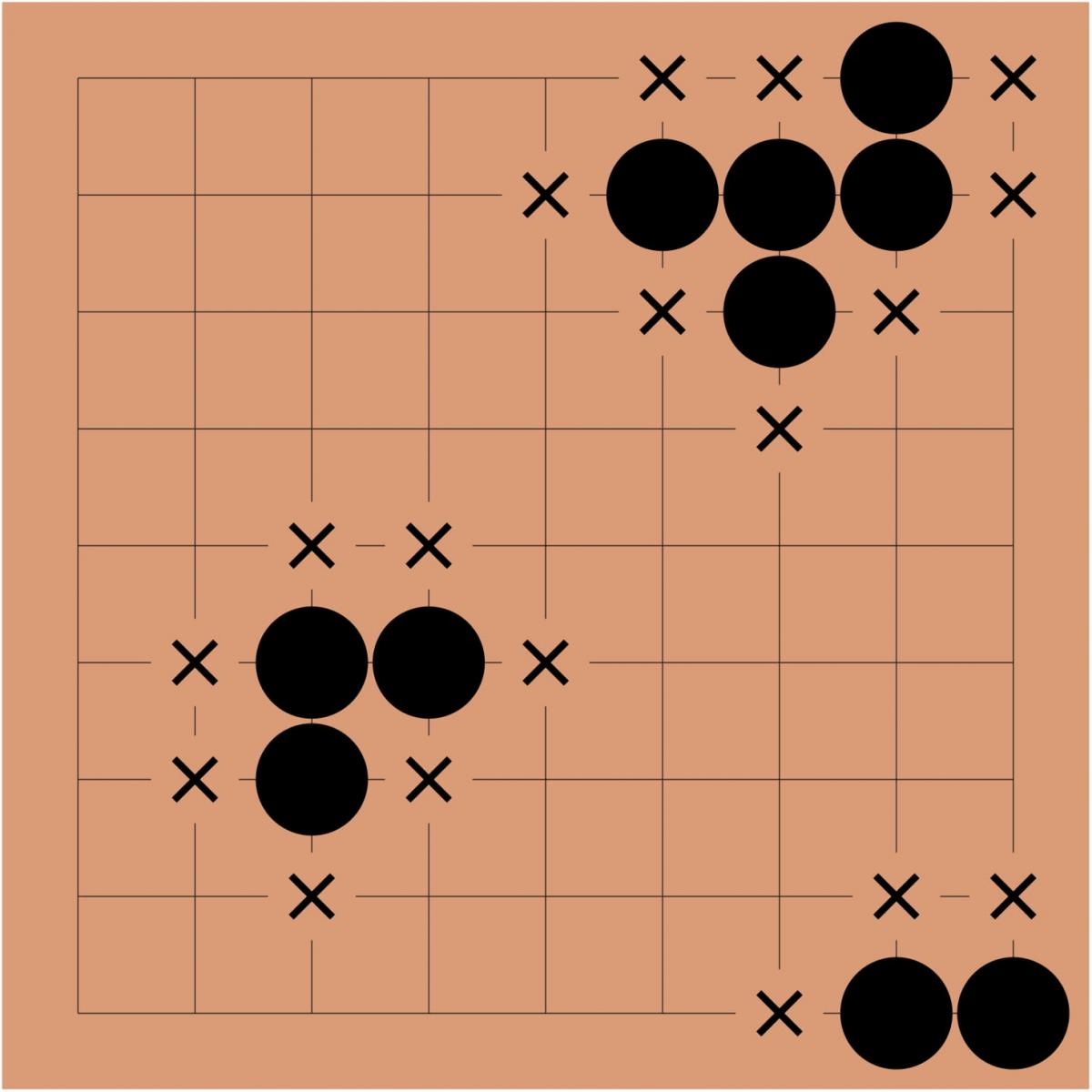 The marked intersections are their liberties. If white takes all liberties of a chain, the black stones forming that chain will become prisoners.

Knowing the capturing rule, we can understand what happens on the 2nd diagram. White can play on the right side of the board. Then black will try to surround and capture white's stone. If black succeeds, they will defend their territory.

Capturing stones also affects the final score of the game. Every captured stone is counted as one point, just like every empty intersection surrounded by a player. Moreover, according to the rules of Go, if a stone can potentially be captured, a player doesn't necessarily need to actually capture it. At the end of the game they can just claim that the stone is dead. Dead stones are taken off of the board and each of them is counted as one point. If the opponent argues that the stone is not dead, the first player needs to prove and show that they can capture the stone.

Watch the 2 min video about the rules of Go game

Board game Go - How to win?

How to play Go against stronger opponents?

In many games there is a common issue. What if one player plays better than the other? The game might be boring because the result can be predicted beforehand. However, in Go it doesn't need to be like this. Handicaps can be used to make the game more balanced in a simple way. The players can decide what is a difference in their levels and based on their agreement the weaker player might have a right to play a few moves in the beginning of the game.

In the game the level of players is measured by a Japanese kyu-dan system. This system was invented a few centuries ago and later applied also to martial arts. To have the chances of about 50-50 for winning the game on the 19x19 board, the difference between the players' ranks should equal the number of handicaps in the beginning of the game.

Komi rule and impossible draws in the Go game

And what about a game between players of the same level? In such a game, the player with black stones has an advantage because of playing the first move. This advantage is balanced by komi - a fixed number of points given to white. It is usually set as 6,5 points. Komi serves also another goal. Because of the half point the game cannot ever end in a draw.

Ko rule - last from the rules of Go

The ko rule is the last of the Go rules. Thanks to the ko rule, every game comes to an end. The rule says that during a game a situation on a Go board cannot be repeated. It would be possible to repeat a situation in a position such as shown on the diagram. 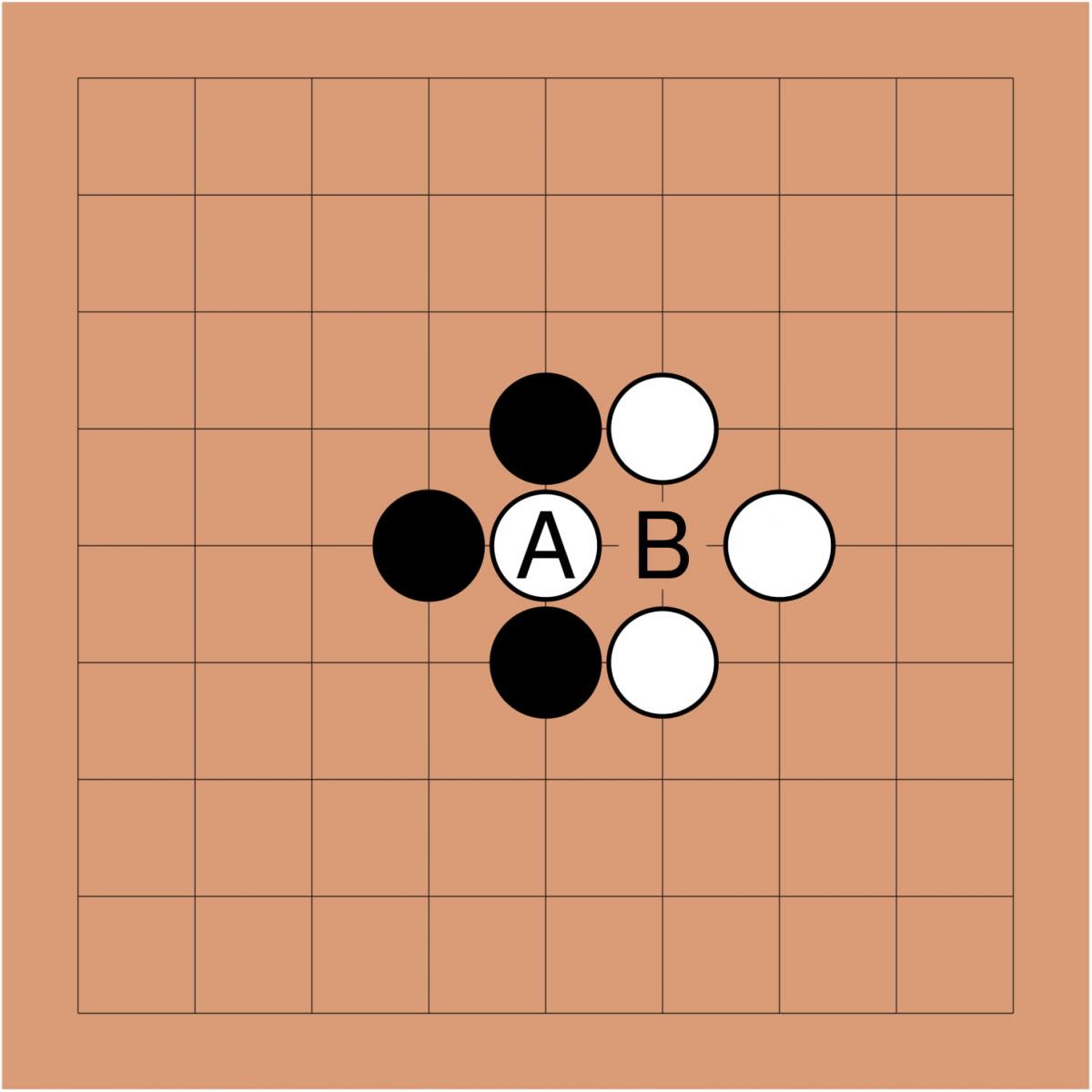 Watch the 1min 41s video about the ko rule

How to start playing Go?

The above description summarizes all the rules of Go game. Now you can start playing Go. Get a Go set and play with a friend or alternatively play Go online. However, even though the Go rules are very simple, the gameplay is very complex and deep. Thus, if you want to learn something more than only the rules of Go (and win more often), click on the article below and learn how to play Go in a way that your opponent will never be able to kill your stones.

Learn to protect your Go stones from being captured!
Click on the link below and learn to think more strategically.
Eyes and False Eyes in Go game - Article and video about "eyes" in board game Go