Why Children Should Study Go? Go is a game, through which your children will learn the business thinking in an interesting way. But how Go is connected with business thinking? Check below the comparison: ”Go vs Business”.

Solving other people's problems is the main reason of having a business. Thus, the owner (or CEO) needs to be able to solve problems.
As advises an Indian billionaire Dilip Shanghvi: "If you want to be really successful in business, first find a problem to solve".

None of the privately-held companies can survive on a long-term basis without gaining profits.

The winner of a Go match is a player who builds bigger territories than the opponent.

You need to make good strategical decisions to develop your business well.
Cai Dongqing, a Chinese billionaire, says: "I think for a company, the most important thing is you must set the right strategic direction, which leads a company to go this way or that way. It will enable a company to achieve further progress or suffer a setback. A wrong decision in this point will pose a major challenge for the company.".

Your children need to make good strategical decisions to head their Go stones in a direction that lets them create more points in a Go match.

And no matter what strategy is chosen, it needs to be logical to work well, in both - business and Go.

The world changes all the time. It's necessary to adjust to the new situations.

Frank Hasenfratz, a billionaire from Hungary declares: "Every day, you’ve got to change. If you don’t change, you die.".

The situation on the Go board changes after every move. Each next move needs to be adapted to the new situation, so that it fits well with the other stones on the board.

A Polish billionaire, Michal Solowow, tells: "Speed in business is in my view one of the critical parameters.".

Playing Go matches with clocks will help your children to develop their skill of making good decisions under time pressure.

*The above quotes of billionaires are from Rafael Badziag's book "The Billion Dollar Secret".

Examples of strategies used in business and in Go game

If your business competitors started to sell the same products that you try to sell and your expected profits aren’t that high anymore - it might be interesting to simply change your products.

If you created a group of Go stones that gave you some influence in one part of the board, but your opponent started to play later in that area - you can still change your initial plan and use your group for something else, e.g. you can use that group to get a territory in a different part of the board.

This kind of strategy can be called a "Blue Ocean Strategy" - same as a title of the book written by W. Chan Kim and Renée Mauborgne.

If you see that your competitors' companies aren't too stable - you can try to fight with them. But instead - you can also try to take them over. This way you will not need to spend any money for marketing to acquire their customers. And if they have some technology that you don't have - you can even get their technology this way (instead of investing money in a research).

If you see that your opponent has very weak groups in Go - you can also try to take over these groups without direct cutting and fighting, but while playing a little bit further. This way you might get points not only for the group, but even for the extra territory which you surround around that group by the way.

It's great if your company works well now. But it's even better if there is a space for development, so that the company could work even better in the future.

In Go it's good to think about the possible future developments and extensions of your Go stones even before playing a move. Even though you might not get too many points on the start - while having a possibility of a nice development - you might be able to get much more points in the future.

Let's say you decided to use your Go stones for creating influence in some part of the board. Your opponent didn't play in that area. And suddenly you decided to play a few moves to take a small territory nearby your stones instead of using that influence to attack opponent's group. This kind of incoherence would result in a loss of influence and in a loss of much bigger potential future territory.

Why is it good to study business thinking through the game of Go?

For many children reading books might be simply boring. Studying through the game is the more interesting way to study. While playing Go, the children are more engaged. Thus, they learn faster.

To understand it better - let’s have a look at the Edgar Dale’s "Cone of Learning". 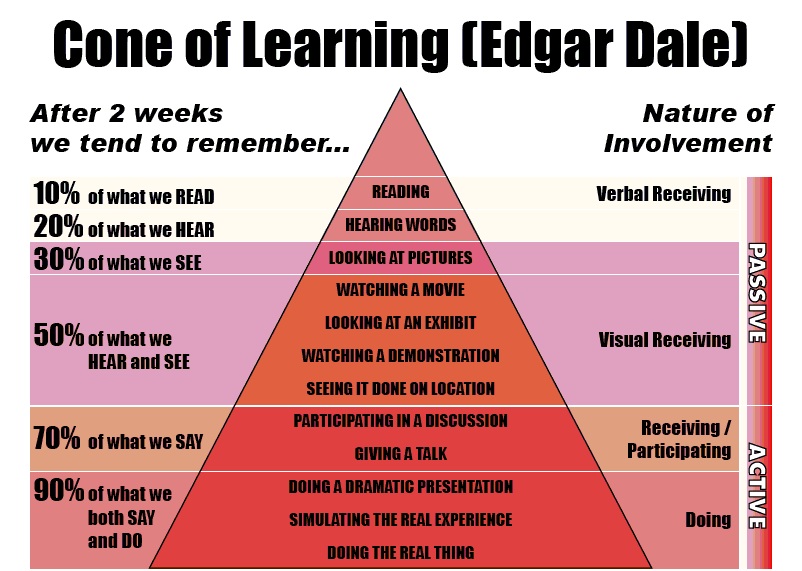 Playing Go is something what your children will DO and while taking part in Go lessons they will be asked by the teacher about their ideas in particular situations, so that they will also need to SAY about their thinking process in those situations. This way more parts of their brains will be activated in their learning process, thus, the children will be able to learn more efficiently.

For a child who was studying business thinking through the Go game it will not be a problem to find analogy in the following terms: