Seki - Life Without Eyes in the Game of Go 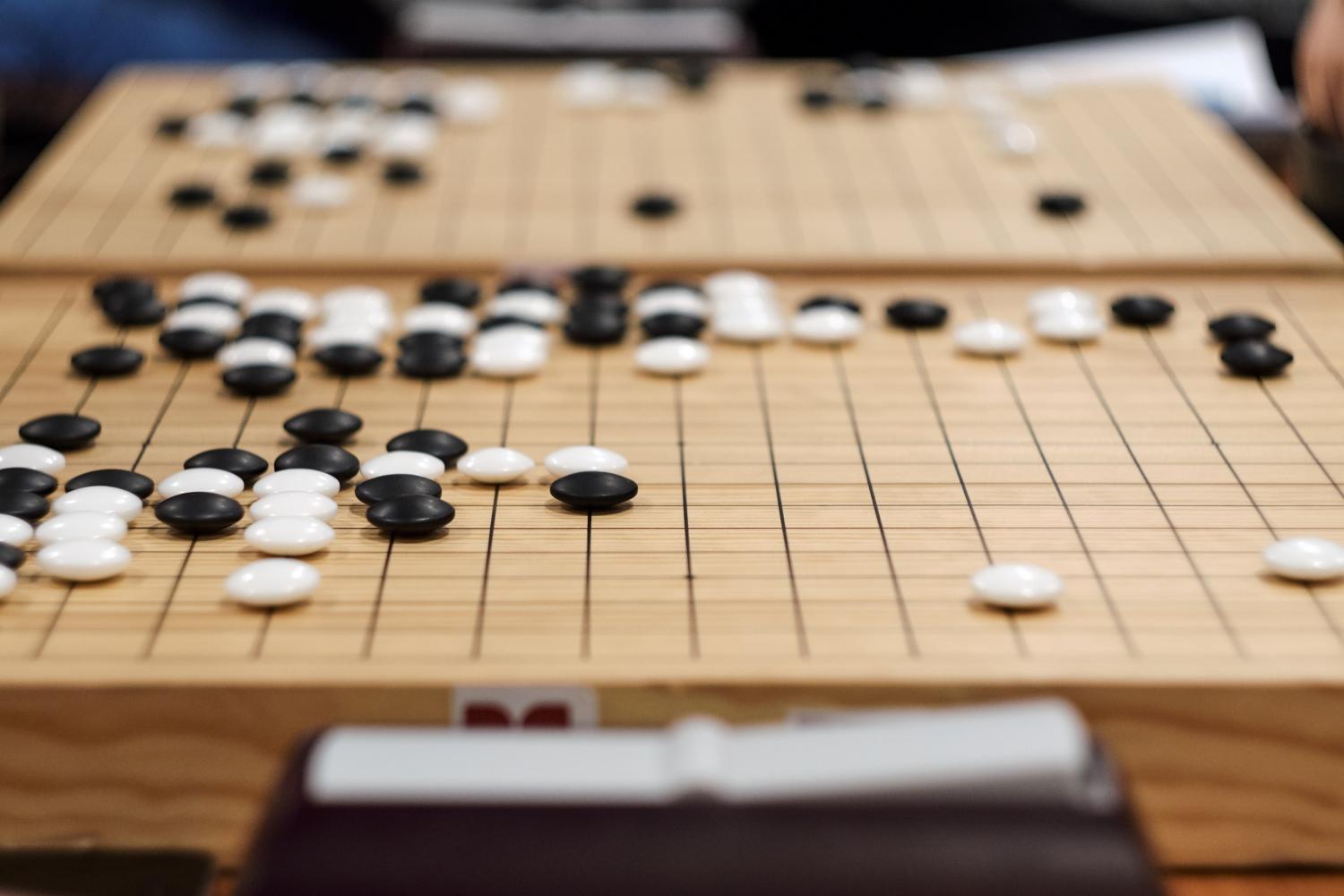 After reading the article about how to play Go you know that in the board game Go each of two players is trying to surround a territory. When one of the players has many stones in one area of the board, then for the second player it might be dangerous to put a stone in that area. The stone might not survive. In the article about eyes in Go game it was explained that a group of stones needs two eyes to survive. A group with two eyes is always alive. In this article we will learn that in fact in Go there also exists a possibility of living without two eyes. 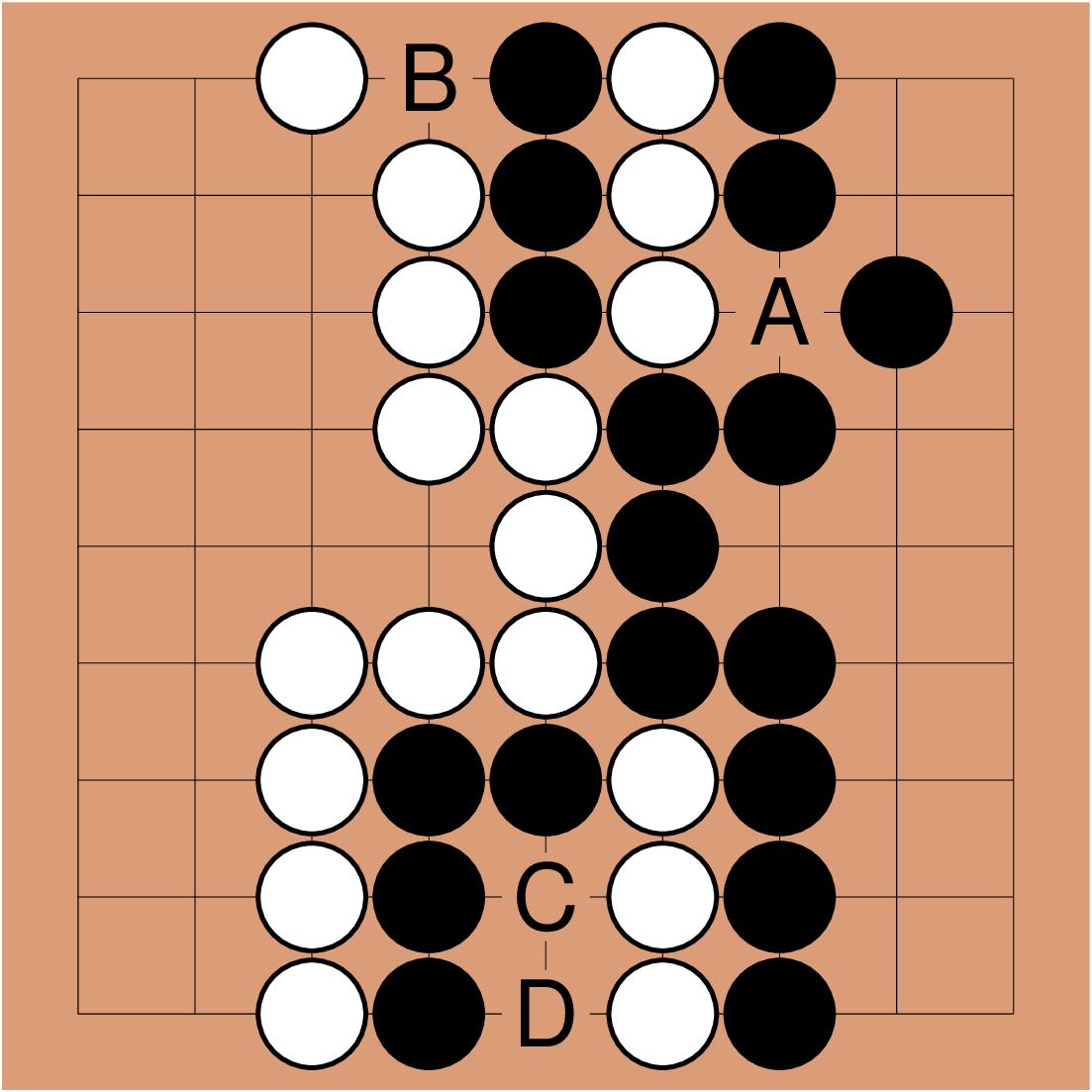 In Go, if a group wants to survive, sometimes it needs to capture an opponent's group. Such a situation is shown on the top side of the above diagram. Black's three stones have no eyes but if Black plays at A, they will capture White's three stones and survive. On the other hand, if it is White's turn, White can play at B and capture Black's stones.

A situation on the bottom side looks similar. The groups of Black and White are both surrounded and have no eyes. However, in this position, the liberties of the two groups are shared by them. Can one of the groups capture the other one?
Let's say Black decides to take away White's liberty and plays at C. At the same time Black takes away their own liberty. It's a self-atari. White can answer at D and capture Black's stones. Trying to capture the opponent will lead Black to death. White is in the same situation. If White plays the first move, it will be a self-atari and Black will capture White's stones.

The situation shown above is called mutual life in English or seki in Japanese. There is an equilibrium between the groups of Black and White. Although both groups have no eyes, neither of them can be killed. Seki is a simple example of a wisdom which is common in Go and which is often applied to more abstract positions: "If you try too hard to kill your opponent and you played too aggressive moves, your own shapes will likely become weaker and in turn your attack will bring your own defeat.". You can read more about the correct mindset of a Go player in the article Go – a Game of Negotiations.

Other types of seki 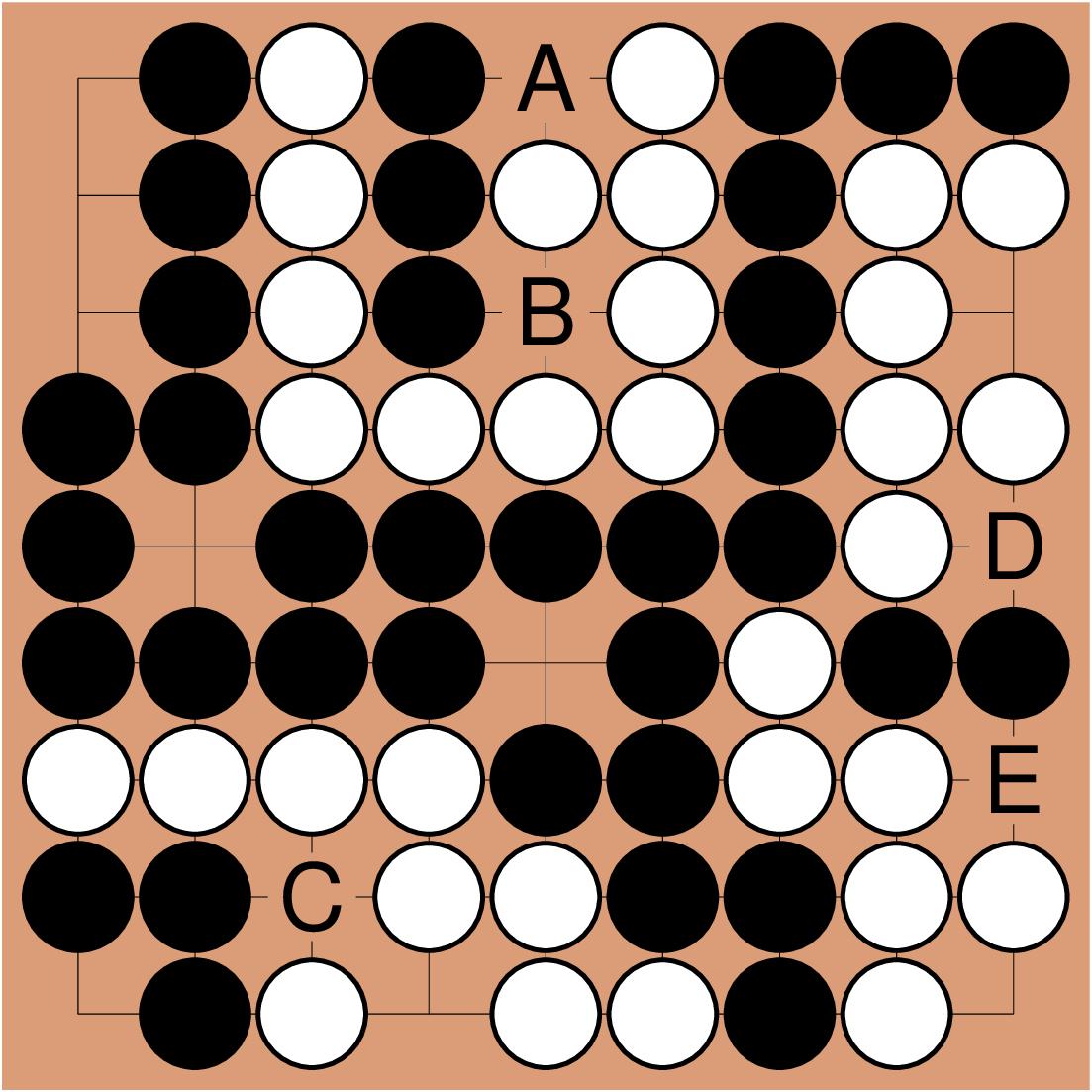 There are many types of seki in the board game Go. Let's look at White's group on the top side of the above diagram. Black's three stones are completely surrounded by White. They seem to be dead. However, if White tries to capture them (for example by playing at A), White's group will die instead (because Black will answer at B). Analogically, Black's move would let White capture Black's stones.

Seki is also possible between groups with eyes. As we know from the article about eyes in Go game, one eye is usually not enough for a group to live. However, in the situation shown in the bottom left corner each of the groups has one eye. The groups have also one shared liberty at C. If any player wants to capture the opponent, they need to play at C. However, it would be a self-atari. Therefore, playing at C is not a good idea. No player will ever play there and both groups will live in seki.

The most surprising example is shown on the right side. Black's two stones have no eye and they are completely surrounded by White. Moreover, White has one eye on each side of the Black stones. However, it's not possible for White to capture the stones of Black. If White tries to do it and plays atari (either at D, or at E), it will be a self-atari at the same time and Black will capture one of White's groups.

Distinguishing between seki and nakade 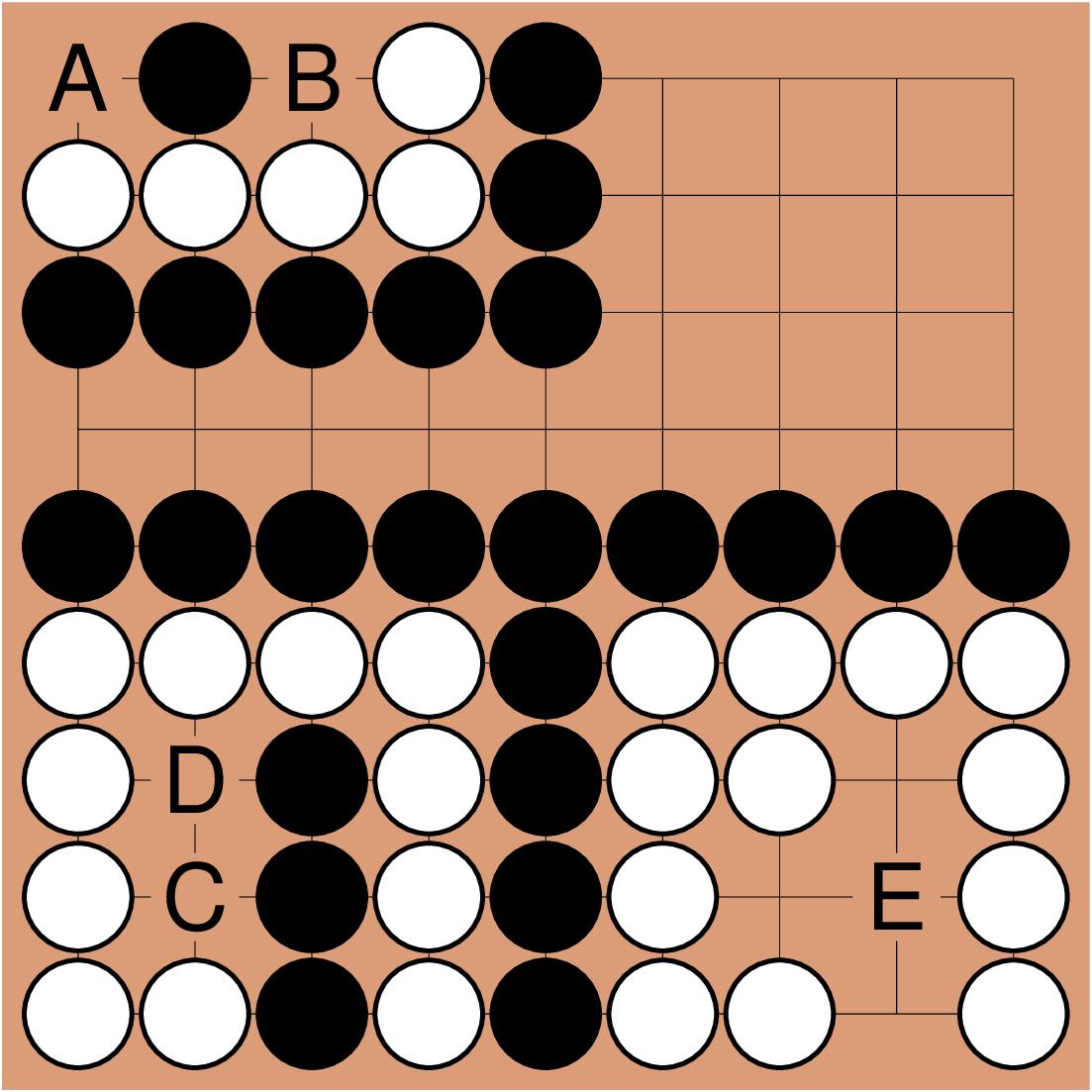 You might remember this and similar shapes from the article about eyes in Go game and its section "Basic life & death problems". In that section on the first diagram there were three Black groups. Each of them had one big eye. If it was Black's turn, Black would be able to split the eye into two and make life. However, if it was White's turn, White would be able to hit the point in the middle and make sure that Black never gets two eyes. Such shapes are called nakade.

Let's look at the situation on the top side of the above diagram. Black's one stone and White's group have two shared liberties: at A and B. But is it a seki? No, it's not! If Black plays at A and White captures at B, White's group will be left with only one eye. Black can continue by playing at A again and after capturing Black’s stone White will have only one liberty left. So, Black will be able to capture White’s group in the following move.

How about the situation in the bottom left corner of the above diagram? It looks very similar to the situation shown on the diagram in the section ”Other types of seki”. Black's three stones are surrounded by White and the groups have two shared liberties. However, the situation is a bit different now. When Black plays at C and White captures at D, White will get a shape like in the bottom right corner. This is a nakade shape. If Black continues by hitting the point in the middle, the group will die.

How to improve the reading skills in Go?

When stones of one color are surrounded by a group of the other color, at first it might be not obvious what the status of the two groups is. Do they live in a mutual life? Or perhaps the surrounded player can let the opponent capture the stones because it would lead to a nakade shape? To know what the final result of such situations is, one needs to be able to read variations and predict what can happen in a few moves. The most general hint is: "Get as large living area as possible.". Then, even if you don't manage to make two eyes, your group might live in seki. To train your reading skills, you can enroll for a personalized training of life & death Go problems.