Ranks and Ratings in Go - Comparison 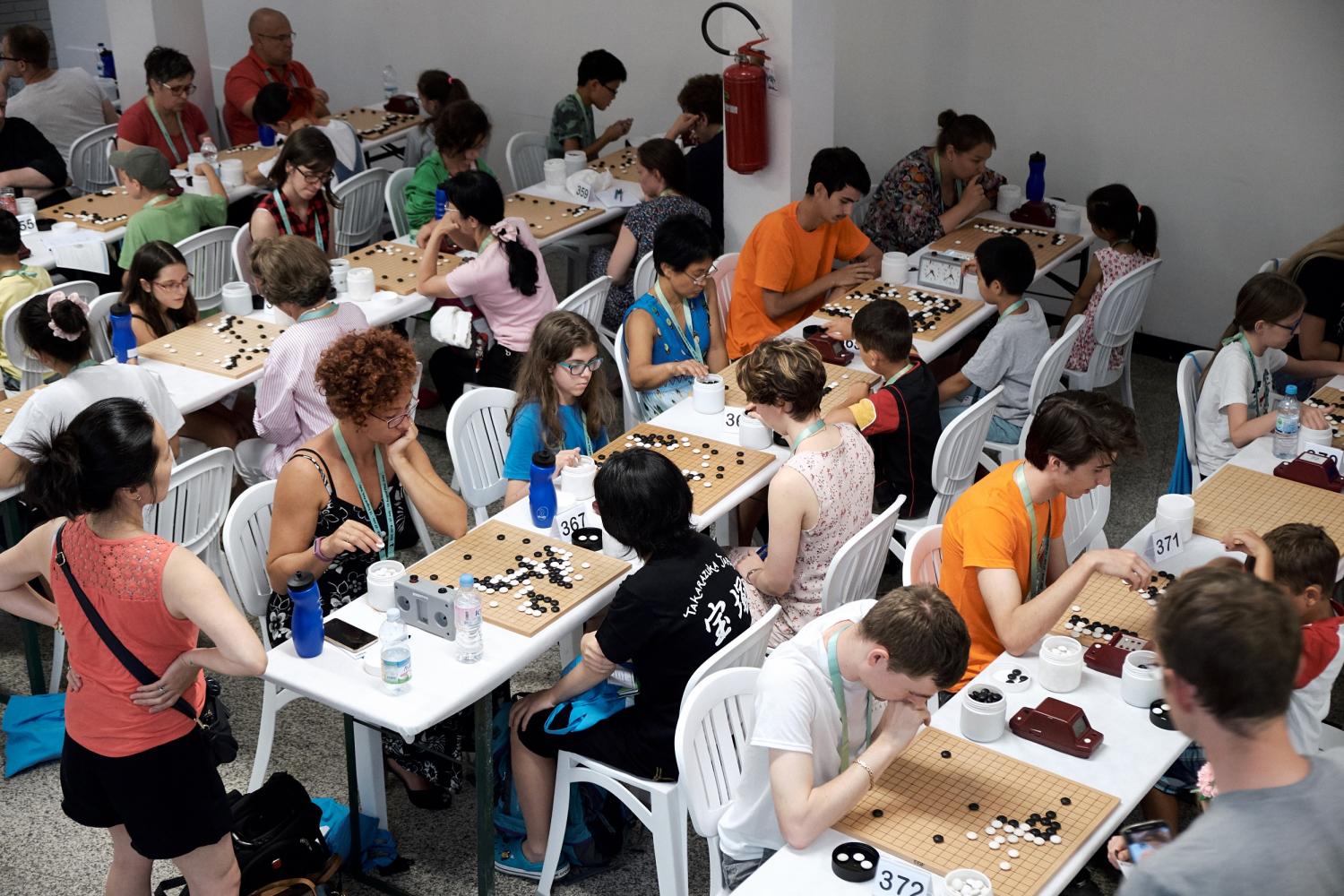 Learning the rules of Go is like opening a gate to the whole new universe. You can learn how to play Go here. The Go game has many aspects, elements of both strategy and tactics. A player can grasp new ideas about the game by playing Go, attending Go lessons and reading Go books. By getting experience with the game and learning new concepts a player gets a deeper and deeper understanding of the game. But is there a way to measure one's skills and playing strength?

In Japan during the Edo period the game of Go became popular and gained an official recognition of the royal court. The first rating system was established then. Initially it consisted of master ranks called dan. The lowest grade was 1 dan and the highest was 9 dan. Achieving 9 dan indicated an outstanding mastery. For centuries there was always at most one 9 dan player at a time.

Later the students’ ranks called kyu were also added to the system. The highest student grade was 1 kyu. Player with lower skills were given grades of 2 kyu, 3 kyu and so on. Starting from the 19th century this rating system was also applied to martial arts. That's why some people who are new to Go might have already heard of kyu and dan ranks.

Handicap Go games have been popular for centuries. The rating system was established in a way that the players would know how many handicap stones should be put according to the rank difference. For example, if a 5 kyu player plays against 2 kyu, then the 5 kyu player would take Black stones and put three handicaps at the beginning. Only then, the opponent would make the first move.

In the modern times there are organized both kinds of Go tournaments: with handicap games and with all games being even (without handicaps). Prestigious tournaments and especially championships which are supposed to decide who is the strongest player in a country or in the world are played without handicaps. On the other hand, most games on Go servers are played with handicaps if the opponents' ranks differ.

The Go organizations in the Far East award the strongest players with professional titles. A status of a professional Go player is very prestigious. Professional Go players usually commit their whole life to Go. They earn money by teaching Go, they are invited to the elite tournaments with big prizes and they engage themselves in various ways of promoting the game.

To become a professional Go player one needs to pass an exam. Most often it is a tournament where only the strongest amateurs are invited. In China, Japan, South Korea and Taiwan each year such a tournament is being organized and only a few players who take the highest places achieve professional certificates. In the West the level of Go players has been steadily improving for the last decades. A few years ago the American Go Association (AGA) and the European Go Federation (EGF) started their own professional systems.

Each Go organization decides on the details of its rating system on its own. However, the basic points are common for all the organizations:

How is the Go rating calculated?

During Go tournaments every game is counted to the rating. The winner of a game is going to get a specific number of rating points and the loser will lose a number of points. A statistical formula is applied to count how much a player gains or loses. The formula takes into account the ratings of both players. For example, if you beat someone much stronger than you, you get around twice as many points as if you beat someone at your level. If you beat someone weaker, you also gain something but not much.

If you play Go online, your server will also assign you a rank. Go servers use a kyu-dan system. Each Go server has its own way of calculating what rank which player should get. You might have wondered: if you have a rank on a Go server, does it mean that you should have the same rank when playing on face-to-face tournaments? The answer is: the rating systems used by Go servers are a bit different than the rating systems of EGF, AGA or other Go organizations. It might happen that in EGF you are ranked as 5 kyu but on a Go server you are playing as 3 kyu, or the other way around.

Let’s say you have been only playing Go online. When you go to your first face-to-face tournament, you are not sure with what rank you should play. Then the organizers of the tournament will probably ask you about your rank on a Go server. Below you can find a table, which can tell you roughly what rank you should be assigned with, based on your rating on a Go server. There are included the most popular playing platforms in the West: OGS, KGS and IGS (also known as Pandanet Go Server). And the most popular western Go organizations: AGA (United States) and EGF (Europe). 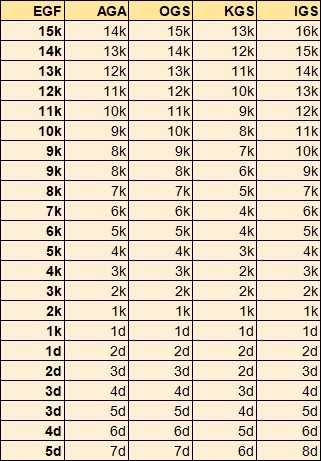 The table was made based on a survey from March and April 2018.

The original table that includes more servers can be found here.

All Go servers and Go organizations aim at making their rating systems precise and similar to the other rating systems. Comparisons like the one shown in the table above are based on statistical analyses. In January 2021 the Online Go Server (OGS) made a significant change in the rating system to make it correspond well to the ranks assigned by EGF and AGA. You can read about it more on the OGS forum.

EGF also applied some changes in their rating system in 2021. The managers of the system realized that over the decades a slow deflation of rating points is happening. It means that for example an average 1 dan player from 2020 is a little bit stronger than an average 1 dan player from 1990. They decided that one constant in a formula used for calculating rating needs to be fine-tuned. On the 4th of April 2021 the change was put into effect. All the tournament results from the last decades were recalculated. As a result all players got a little increment of rating points. Most often it was something around 10 to 60 additional points.